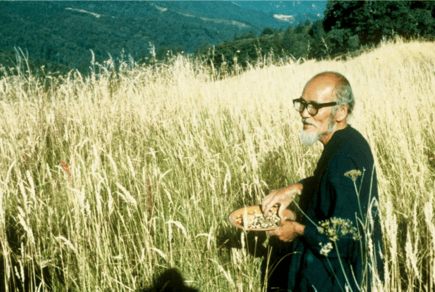 to remind myself I sometimes have very little idea of what I’m doing in my garden – and my life.

In some ways it’s a troubling reminder while in other ways it’s quite freeing.

But freeing because I see that it’s okay to not have the answers to most of life’s questions, to admit that at times I have no idea what I’m doing.

This being a gardening website, I’ll leave the philosophy mostly aside for today (although having been learning a bit about Buddhism lately, it seems to me he’d been heavily influenced by Buddhist teachings).

But his book taught me a lot about gardening, and has clearly influenced the permaculture farming movement, too.

For much of his long life, Masanobu Fukuoka farmed in Japan using a method he called “natural farming” or “do-nothing” farming.

That’s not to say no work was involved, but instead of asking, “what if I added this to the soil?” and “what if I did that to my plants?”, he asked, “what if I didn’t add this and didn’t do that?”

His goal was to let nature do most of the work. As a result, he came up with 4 main principles:

The title of his book ‘The One Straw Revolution’ refers to his idea that if we were to grow food by working with nature, including returning all organic matter (such as straw from grains) back to the soil, we’d be a whole lot better off.

There are a couple of other metaphors buried in that title, but let’s get onto what this means for you in the garden…

So What Did Masanobu Fukuoka Do?

Masanobu Fukuoka was an interesting guy. All of these are certainly good practices that I generally follow. I’ll comment on them a bit and bring in some different viewpoints:

While we’re talking about tilling, weeds and pesticides, here’s something interesting Malcolm Beck said when he was being interviewed by Graeme Sait:

If the weed is a true weed, then it will gradually disappear when you balance the soil. However, in Texas we have a forage crop that’s our biggest weed. It’s called Johnsongrass. It’s a high protein forage crop. The richer you make the soil, the better it grows. It has deep rhizomes. It’s really difficult to control this plant mechanically. It uses huge amounts of energy. This is a case of “does nature approve?” I just about wore out a tractor trying to control this plant when it would have been so easy with glyphosate [Roundup] applied at the right time. Sometimes you have to weigh things up. I talked to Elaine Ingham about what happens to glyphosate and she said that the bacteria eat it right up as long as you still have the life in your soil. The warmth of the soil is also important. It only takes three days in a good Texas soil to get rid of Roundup, but it can take up to 18 months in Canada, where the soils are cold. I also talked to Dr Don Marks. He was the first guy to really do a lot of research on mycorrhizal fungi. He has won all kinds of awards for his work. I asked him, “If I was trying to protect my mycorrhizal fungi, would you rather me fight the Johnson Grass with a plough or herbicide?” He said, “When you plough, you destroy the host and you tear the mycorrhizal fungi apart before they get a chance to spore. When you use glyphosate as soon as that plant stops photosynthesising and not delivering sugars to the fungi, it immediately puts out spores.”You think about it, which would nature approve? Me, putting all that carbon dioxide into the air, wearing out a tractor, oxidizing all of that carbon from the soil or using a little glyphosate in the right way? Forget organics – let’s look at nature. If you have to use glyphosate, use it at night to avoid drift with the thermal rise in the morning. I use an ounce of molasses per gallon of mix. It acts as a sticker but it also provides energy for the microbes to break down the glyphosate.

They both disagreed with many of the assertions made by Beck/Ingham/Marks, and although they didn’t say so directly, I inferred from their responses that they probably disagree with that rational for using glyphosate.

Comments? Questions? Let me know down below 🙂

Interesting that most commenters are focusing on the glyphosate issue from Mr. Beck rather than the rest of the article, which is all about not using chemicals.

Some good points you guys are making and some I disagree with, but that’s okay – that’s what comments are for.

On my end, it’s Sunday morning, I’m getting ready to head off to a meditation and I just don’t feel like getting into a big discussion about it, so I’m not going to respond to each comment. Feel free to debate amongst yourselves – just please be respectful of each other.

And just so you know, I don’t use Roundup or any other pesticides, but I do try to keep an open mind about everything in life, even if it’s something I disagree with. Now, time for breakfast 🙂