And also the generally toxic environment we live in with pollution, antibiotics and other pharmaceuticals in our air and fresh water.

Phil: [singing] Oh when the sun beats down oh on the…something, something…ya….

Today I’m talking about soil inoculants. Using a soil inoculant might seem kind of strange so I want to start with why you might want to do it. Now I talk about my two favorites are compost tea and effective micro-organisms.

The reason your soil may be lacking in biological diversity is just some of the things we’ve done over the years to it. It could be tilling, or past chemical fertilizer use, or pesticide use, or general landscaping practices.

Or it could be just the generally toxic environment we live in with air pollution and water pollution. Some of these things that make their way into your soil. Today I’m going to introduce you to two of my favorite soil microbial and the first is mycorrhizal fungi.

And I remember when I was in the amazon jungle making some videos for you I was talking briefly about the fungi and how when we’re standing in a jungle all of the trees, or most of the trees, are going to be connected but this network of fungi underground.

It’s the same in our vegetable garden. And what these guys do is they effectively extend the root system of some of our plants so that they’re bringing up nutrients and water, far from in the soil up to the plants and they’re protecting the plants from plant predators.

And then the plants are giving them carbohydrates and other food in return, so it’s this bartering system and this real cooperation that goes on. And not only that but then all the plants are connected through the same fungal network plants share nutrients and other products and even information.

What I could do to get this fungi is go into a forest and dig up a little soil and then put that soil wherever I want the fungi to be and that can work okay but what I prefer to do is to buy an inoculant online you can even get them on amazon.com or other places online or in some garden centers and that way I know exactly what I’m getting, I know I’m getting the right fungi for my needs.

And so I’m going to show you what this fungi looks like, it’s kind of windy out so I hope it doesn’t all blow. There it is, this one is really micronized into a powder form and it will be on some kind of a carrier like humates or rock dust or something like that.

And then this is nice because I can really get it down right around the seed or the plant roots because you don’t want to apply this to the leaves – there’s no benefit to that – this relationship occurs at the root level. So that’s why the best time to apply it is when you’re seeding or when you’re planting or when you’re growing.

Even in the nursery! If the nursery applied it that way it’d be great, too. So what I’m going to do – I’ll show you – here’s a tomato plant. And all I need to do is just take a tiny bit of this fungi, this is plenty, all I need really is half a teaspoon or less for this.

And just put it on the roots, I don’t have to get all the roots even if I just do one side that’s probably fine – and that way that relationship can happen now.

So they help these bacteria create these little homes on their roots, and then the bacteria can go taking nitrogen out of the air, and turning it into a form that plants can use. And that process is the basis for other other life on earth really because it’s these bacteria that get the nitrogen that allow us and animals and plants to build proteins and amino acids, enzymes things like that.

So a really important process. If your legumes can’t find the perfect bacteria in the soil to work with they’ll try to work with other bacteria and if they can find some kind of nitrogen bacteria they can make it work okay, but it’s not going to be optimal.

Now you may just be thinking, well, maybe my beans and peas won’t be that great – it’s just one crop it won’t be that big a deal, but to me it’s a big deal because  just because of the importance of legumes in improving the soil in our garden.

It’s especially a big deal because in every fall I like to seed a cover crop that includes legumes, so I really want them to have their perfect nitrogen-fixing bacteria partners at that point.

And so here I have some black beans as you can see and then some pole beans that are more beige. And what I can do with this inoculant – you can buy an inoculant again in a garden center or online especially online it’s easy to find.

You can get it in liquid or more of a dry form. I have the dry form here and it’s…there it is…and I just rub it on to all of my seeds at the same time and that’s the fastest way to do it. If I were applying a mycorrhizzal inoculant to these seeds I’d do the same thing just sprinkle it right on there and now I have the inoculant on there and I can plant these.

So those are my favorite two soil inoculants: mycorrhizzal fungi and a legume inoculant. There are others that are becoming more popular like trichoderma fungi and there are other nitrogen-fixing bacteria that live freely in the soil not on plant roots and they’re interesting but these are still the tried and true ones, so these are the ones I always recommend starting with.

If you have any questions about soil inoculants ask them down below and I’ll answer them. If you haven’t signed up for my free online organic gardening course you can do that down below. And if you haven’t joined me and my sister over on Facebook you can do that at Facebook.com/holy-cow-life’s-so-awesome-and-I-just-love-gardening….dot…net.

A lot of this imbalance arose because we’ve tried to control the living world by killing or removing the organisms we don’t want.

But now that we know how hard it is to create healthy ecosystems this way, we’re using a new approach instead: restoring the balance by inoculating with the microbes we DO want.

My favorite inoculants for foliar feeding are compost tea and effective microorganisms, and they’re good soil inoculants, too. I discuss them elsewhere.

But beyond these, there are other ways to repopulate our soils. Here I’m going to tell you a bit more about two very important soil inoculants: mycorrhizal fungi and legume inoculants. 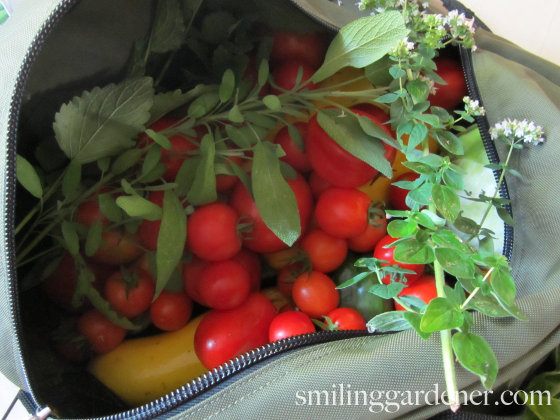 I just visited home and threw a bunch of veggies into my shoulder bag to bring back to Toronto, mostly tomatoes, potatoes, zucchini, cabbages, herbs and garlic (smelled pretty good on the bus).

Almost all of the plants in the world, where the native soil is still undamaged, are connected by a vast underground fungal network.

Plants will exchange many of the carbohydrates they produce with these fungi in exchange for nutrients, water, and protection from disease.

Plants also share immune compounds, nutrients and information with each other through the fungal network.

The mystical, unified web of life depicted in the movie Avatar isn’t fantastical at all. It’s right under our feet.

That still leaves 95% of plant species looking for a handful of very common fungal partners, which can often be absent in damaged soils.

Fortunately, it’s not hard to restore the mycorrhizal fungi.

We can get mycorrhizal soil inoculants by taking a small bucket of healthy soil from a nearby intact ecosystem, or we can be a little more sure by buying them as a soil inoculant from some garden centers or especially online.

The advantage of the latter is that you know for sure what you’re getting.

Fungal inoculants are best applied at seeding or transplanting time, though they can be watered in later in porous soils. What’s essential is that this soil inoculant makes contact with plant roots, since the root exudates bring it to life.

There’s no point putting mycorrhizal fungus in foliar sprays or compost, as it’s the plant roots that form relationships with it.

Update: 6 months after I wrote this, I decided to start selling a mycorrhizal inoculant, so if you want to learn even more about this process, you can do so here. 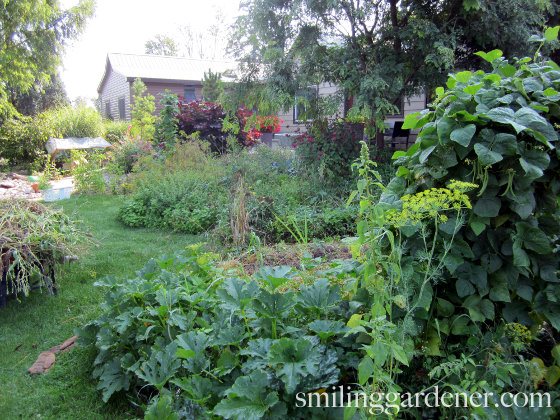 The vigorous beans climbing up the trellis in the front right of the photo were inoculated with both legume and mycorrhizal fungi inoculants.

The plants we think of as “nitrogen fixers” are actually just great hosts for the microbes that do most of the work.

If your peas and beans are lacking in vigor, it may be because they don’t have the right bacterial buddies in their root zone.

Most nitrogen fixers are in the Legume family. They seek out their preferred species of Rhizobium bacteria in the soil, and grow clusters of root nodules to encircle the bacteria and provide an ideal home for them.

Look for these little pinkish nodules next time you dig up a pea or bean, and see the magic at work.

If your legumes can’t find the right bacteria, they’ll try to work with others, but we can help by making sure they have exactly the partners they need to do the nitrogen-carbon dance that keeps all of life swaying to the music.

That’s where using a seed inoculant for peas or beans or clover or whatever legumes you’re using comes in.

Again, it’s often easiest to buy it online, but some garden centers carry it. I like to sprinkle a little powdered legume inoculant over my seeds before planting.

Many new microbial soil inoculants are now becoming available, including some free-living nitrogen-fixing microbes, which don’t need a legume host.

There are also non-mycorrhizal fungi such as Trichoderma that seem to protect effectively against soil diseases.

These are great if you’re ready to get into the more specialized technical side of organic gardening, but you can make a huge difference to plant health and growth right now by starting with the above tried and true ones.

Any questions about how to use a microbial soil inoculant? Or other inoculants? Or soil microbes in general? Let me know down below.