This is a short post on herb gardening for beginners, and I came up with the 3 best herbs for getting started with in an organic culinary herb garden.

This transcription will have some mistakes because it is partially automated.

Hey guys it’s Phil from SmilingGardener.com and today I wanted to make a video about herb gardening for beginners, before I get into that if you haven’t pick up the 15 Vital Organic Gardening Lessons For Becoming A Better Organic Gardener you can do that over on the main page of SmilingGardener.com and those are just lesson when I’m first studying organic gardening I thought were really cool and I still think they’re cool so I put them together for you for free. So you can get those for free there.

So herb gardening for beginners, what I was thinking is it its kinda neat to put together what I think maybe three of the best herb for beginners to start with when they’re putting in a culinary herb garden and I’m actually gonna ask you for help on this because it’s really difficult narrowing it down.

I have – I don’t know maybe 15 to 20 variety of herbs in my garden and I think most of them are really pretty cool and it was kinda tough so what I did is I tried to move in to the shadows here. I tried to come up with some guidelines to make the decision easier.

So the first thing I thought was it be really good to start with Perennial for people. Perennials are herbs that you can plant you know plant them once harvest from them that year and also harvest from them on future years too. They’ll keep coming back from you.

And so I have some annuals here or what are annuals at least in my garden where I live that I love like basil is one of my absolute favorite herbs. I have this bigger leaf basil and this smaller leaf basil, I also have a purple leaf basil over in another bed.

You know I have dill right here which is an annual here which is really nice so those are two of my favorite herbs but they’re annuals and I thought well let’s stick with perennial herbs that makes a lot more sense to me for beginners.

I also wanted herbs that were very easy you know something like a rosemary. At least where I live it usually has to be brought in, in the winter coz it usually doesn’t like our harsh winters. So that’s a bit of work to bring it in and then you know plants have a tougher tights inside so it can get unhealthy especially Rosemary in the winter and you got to bring it outside over the spring so its a lot of work so let’s stick with things that are easier.

Same with my savoury which I really do love but I just don’t find that I use it that often so I think that ok let’s stick with herbs that are really useful in the kitchen that we use all the time.

And then last I also wanted something that’s pretty common, that’s easy to find. I stayed away from things that you would direct seed. I just – I went for things its good for beginners just go buy them from a garden centre so I wanted some common herbs.

And so with that I think what I’m gonna do is show you coz I want to keep the video shorter. I’ll show you one of them and the other two you can go if you’re not already in my website I’ll put a link down below you can go check them out in the website because I wrote some detail about them what they’re useful for.

So the – let’s see, the one here that I thought would be really useful to start with is chives. So chives are you know very useful in the kitchen you can use them raw or cook or you know other kind of things.

They’re very easy in the garden once you plant them you can kinda forget about them and they’ll keep coming back, they’ll self seed, they can take a little bit of shade so they’re, they’re kinda bit easy they’re not quite as medicinal like the other- the other two herbs that I put I my site are/have some nice medicinal purposes. Chives are good for helping your digestion and increasing/improving sort of increasing your appetite.

But they’re not quite as medicinal but there is one really cool thing about them and that is that they are apparently a pretty good insect repellent if you can get the juice out of them. I think catnip should be better, catnip suppose to be really good but chives are supposed to be ok too so what I’m gonna do is I’ll set you down here. You can – you are cut out from my garden by my rabbit fence and I’ll – I’ll just want to harvest a little more.

And I think I just kinda get my spoon in there and putting them down that’s why a hand blender would work better but what I can do now is just take these stuff, put it in a jar, there’s all kind of juice in there and try to use that as an insect repellent because it’s getting to be mosquito season. So I’ll see how that works. I know the catnip works well.

Yeah so my other two, the other two I wrote some detail about them at SmilingGardener.com while you’re there you can pick up the 15 Vital Lesson For Becoming A Better Organic Gardener and also if you have sort of three herbs that you think best for people to start out with, it will be great if you could let me know below and that’s all for now, I’ll see you next week.

It’s a tough one, so I’m going to ask for your help. There are a lot of great plants for organic herb gardening out there, so I set a few parameters to narrow it down:

With that, here are my 3 recommendations for herb gardening for beginners: 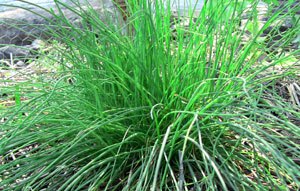 1. Chives. Related to onions and garlic, chives are actually a small bulb, but you use the above-ground leaves in the kitchen. They are very nice in many dishes, raw or cooked.

Once you get the plants going, you can ignore them and they’ll continue to grow in your home herb garden. They’ll self seed, too. Not as medicinal as the others below, but chives are good for digestion and improve the appetite. They’re also used as an insect repellant. Full sun or a touch of shade. 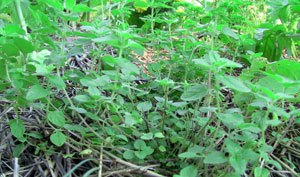 2. Oregano. A staple in sauces, we use oregano all the time – fresh and dried. It’s often used dried in the Mediterranean.

Apparently, most dried oregano from the store is actually from others plants – mostly Lippia and Origanum (same family, but a different plant). Great for herb gardening, as it attracts insects and has a whole whack of medicinal uses. It really helps the digestive system. Not great in medicinal quantities for my cousin Kari though (8+ months pregnant). Full sun or a touch of shade. 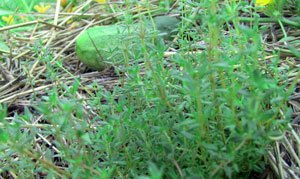 3. Thyme. A staple in herb gardens that is great in sauces and attracts insects. It’s mostly used in cooked foods. The oil in the leaves is an antiseptic and disinfectant.

You can even walk on some varieties and they will be okay. A good choice for herb gardening for beginners. Needs full sun and doesn’t like wet feet.

So those are my picks, but more important, I want to know yours. If you’re into vegetable gardens, what are your top 3 herb plants that people should start with in their organic garden?