If you’ve always wanted a pet, but think:

(no offence intended to my dog/cat/fish loving readers),

I have the perfect solution for you: worm bin composting!

Phil: Hey guys it’s Phil from smilinggardener.com, if you haven’t checked out my free online organic gardening course, you can do that right on the home page of smilinggardener.com. Today we are talking about worm bin composting; maybe you don’t have a place to have a big outdoor compost but still want to recycle those fruit scraps into something really nutritious and that’s where worm bin comes in because it’s really compact. You can do right inside and then mix really wonderful compost.

So the first thing we are gonna do here is to make a worm bin, you can buy them online already made but I want to show you how to make one from much cheaper. The size really doesn’t matter too much but what I have here is probably 15 inches wide by 24 inches long by maybe 24 inches tall something like that, start with the bottom. Can you see the bottom holes, I have the 6 to 12 holes. I usually drill in the bottom and that per drainage, so that extra water can drain out then along the sides I usually have 6 to 12 holes and also I will show you these holes in the lid that allows for just air movement because you know worms to breathe air just we do. You also need just to settle the bin up a little bit.

So it’s allowed to drain, so any kind of wood blocks or if you want to have some of the fun, you find some little branches like that and you set them down underneath the bin, so it’s sitting up. Other thing you need to do is have a drain into something. We happen to have another lid that’s a perfect way to catch the liquids it’s gonna run out otherwise any kind of a tray will work. The worms need a home and since we are gonna be adding a lot of nitrogen rich food scraps. We need some carbon rich bedding as we call it. You can use some leaves for that, some straw for that but what’s commonly done is some newspaper.

Another thing we can put in there which is a very, very good idea is some sand. Worms need sand in order to process their food. These few little bit sand in there or if you just have some soil to have a little bit of sand in it that will be fine too. You don’t necessarily have to go and buy sand, it’s basically a lot like a compost power where we wanted to be moist like a runout sponge, a worm bin is even kept a little more moist. What’s can be nice somewhere but still you want the worms to be able to breathe air.

So we don’t want to be too soaking with, we get red regular worms which tend to hang out sometimes in compost piles especially in maneuver pile; most of us what we do is we go by them and that can be a little tricky to find in your local area, sometimes you might have a local person who sells them or sometimes you might them at a farmer’s market, the often you can online do a little bit of searching and find them and have them shipped to you, often what’s recommended for a box besides is about a pound of worms, it’s leaking and it’s being cut just like it suppose to.

I have gotten a way with half a pound of worms before because they can be a little pricy but really not too bad, so I had some worm shipped to me and these people did a fantastic job shipping, so that the worms are in this really nice bedding already. You can see any worms in there, in order to help them settle in, it can be handy to get a light and turn it on and kind of put it into your bin like that, worms don’t like light so they are gonna go down into the bin there and get really comfortable down in their bedding, after a few days or maybe as long as a week, you can start feeding your worms once they are comfortable in there and now eat pretty much any food scraps but there are few things you shouldn’t really feed them. You don’t really want to feed them much in the way of meat, dairy, really oily foods, really salty foods or really hot spicy foods and that’s about it, we don’t love citrus so not too much citrus and also not too much in the Allium family like garlic and onions but a little bit isn’t a problem, egg shells no problem, parsley, broccoli.

I wouldn’t go for the citrus, if I can help it and in all kinds of other foods scraps we are having here, pepper, sweet potato, it’s all good. So how do you do this, well you can use your hands or sometimes after a while especially once it gets going, it can be kind of handy to use a spatula to get in there. I am gonna to start adding food, I will take a corner, I will bury the food in that corner and I basically start kind of slow, one pound a week then maybe 2 pounds a week and then for a bit in the size maybe up to 4 or 5 pounds a week eventually and I have probably added about twice a week, so I don’t go adding it everyday just because I don’t want to disturb than more than I have to, so what I will do is I will add into this corner and kind and buried in there and that helps stop the food flies from coming and just mix it better for them, it’s kind like when you are mixing up the compost pad you want to mixed together that I will go into this corner, then I will skip kind of working along the bin every few days, pretty more food scraps in by the time I have finished over here and I come back to the beginning, these food scraps should be largely broken down and like, then I can start again at the beginning. If you have any questions about worm bin compost you can ask them down in here, if you haven’t signed up for my free online organic gardening course, you can get it down in here. You can join me and my sister over on Facebook at faebook.com/smilinggardener.

In case their wriggly cuteness isn’t reason enough, they offer some of the richest compost available, and a great way to deal with your kitchen scraps without leaving the kitchen, especially if you don’t have space for an outdoor compost pile.

Even a small amount of worm bin compost, or castings, is a huge benefit in creating a healthy organic garden…

How To Build A Worm Bin 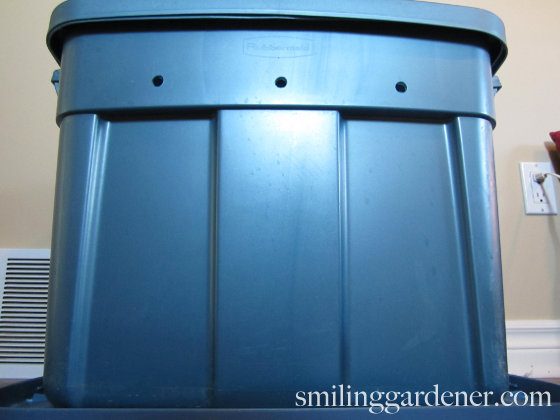 Worms like it simple, so any worm composting bins that are made of non-toxic materials will do.

The simplest way is to buy one ready-made, but a diy worm bin is easy.

When making a worm bin, you can start with a plastic storage tote, about 18 inches wide by 24 inches long by 18-24 inches high.

Drill about 12 holes for drainage and aeration in the bottom, about ¼-½ inch in diameter, then another dozen or more on the sides towards the top.

Don’t worry about the worms crawling out – you’re making great habitat for them inside the vermicomposting bin, so they’ll have nothing to gain by escaping unless something is radically wrong.

Who breaks out of a 5-star hotel?

For the drainage holes to work, you’ll need to set the worm bin slightly off the ground on bricks or something.

You’ll also need a catchment tray underneath it for the small amounts of leachate that drain out. A second lid works perfectly for this…

Since you’ll regularly be adding nitrogen-rich food scraps to the compost worm bin, you need some carbon.

Make the bedding out of high-carbon materials such as straw, leaves, and non-glossy newspaper.

These should be shredded, though some coarser bits will enhance air circulation.

Worm bin composting is slightly more moist that regular composting, so don’t be afraid to get it nice and wet, as long as it’s not waterlogged.

They prefer a temperature between 60F and 80F, out of direct sunlight. They’ll survive at lower temperatures, but become sluggish and unable to process much food.

You might not like sand in your own bed, but worms thrive if you add a handful of sand or sandy soil to their bedding. They have gizzards, like chickens, and need the sand to digest their food… 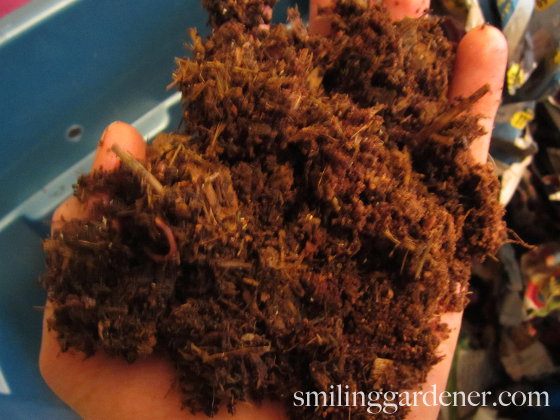 It’s supposed to take about a pound of worms to start a worm composting bin.

I’ve gotten away with a half pound.

You can add them to your cubic foot of bedding once it’s well moistened.

It’s great to let them settle in for a few days before feeding them, to give them time to adjust to their new home.

In fact, if you keep the lid off for the first day and perch a light over the bin, that will encourage the worms to burrow down in there.

Worm bin composting is done in the dark because the worms don’t like light, so it’s best not to disturb them too often – no need to turn the materials in the worm bin, because they’ll do it for you… 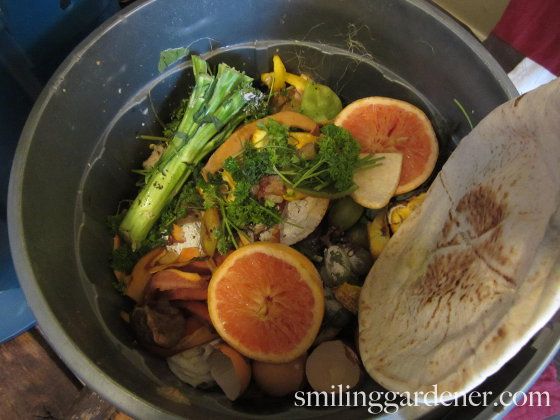 Red wrigglers have slightly refined tastes, but will generally eat most things you eat, with the exception of meat, dairy, and very oily foods.

They’re not too keen on citrus, onion and garlic skins, very hot spices, or excess salt, either, though they love their coffee grounds like a Wall Street hedge fund manager loves his triple macchiato.

It’s important not to overfeed them at the beginning, so you can start by giving them about 1.5 pounds of food scraps per week. To avoid fruit flies, make sure you bury the food in the bedding.

Eventually, composting worm bins this size can process up to 4-5 pounds of food each week, which is perfect for two people, or one person who eats a lot of veggies.

You can work your way across the bedding every couple of weeks, then start back at the beginning, where the original food scraps should be mostly broken down into nice, juicy black worm poo…

Ask me your worm bin composting questions below or upload a picture of your worm compost bin!