Larry Hansford is an avid reader of this blog and he recently asked me if I’ve written anything about attracting insect-eating birds into the garden.

I said not much, would you like to write a little something?

And so he wrote about his garden and he filmed the video below. 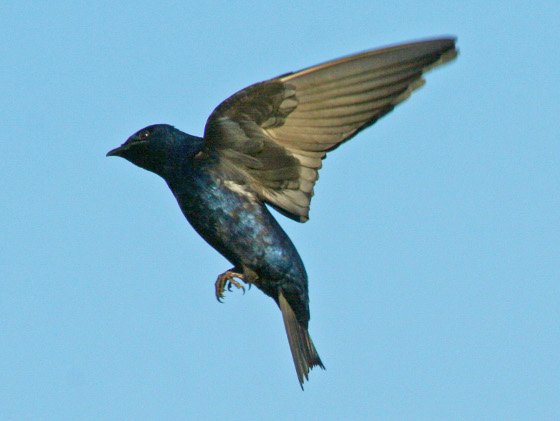 For many years, we have had a house for Purple Martins, and have enjoyed the mosquito-free yard that they help maintain.

Plus, it is entertaining watching and listening to them while they work.

Over the years, I noticed that while mowing with the riding mower that the sky would fill with birds that were catching the bugs that the mower stirred up.

But they were not the Purple Martins which remained on their house.

After some research, I discovered that the birds were Tree Swallows and Barn Swallows.

The Barn Swallows had nests in the rafters of the old barn in what used to be a pasture on our property, but it was not clear where the Tree Swallows nested.

This is the fourth year that we have had Tree Swallows and Bluebirds nesting around the gardens in the houses I provided for them.

Not only has it been a joy to watch the birds flying about the yard, coming and going as they search for bugs to eat, but there has been a tremendous reduction in pests in the gardens.

One of the Tree Swallows favorite insects is the White Cabbage Moth. Because of the birds’ pursuit of the moth, we seldom see cabbage worms on the brassica family plants in the gardens.

Additionally, I have observed the Bluebirds sitting on the edge of the raised beds watching for squash and cucumber beetles, and feasting on them when they detect motion.

I have never seen the swallows on the ground, or in the raised beds looking for insects, but I have frequently observed the bluebirds doing so.

Meanwhile, the swallows will sit on the top of the trellises for cucumbers and squash just waiting for a moth to fly by.

One thing we have learned about attracting birds to the garden, though, is to not use the yellow sticky traps to catch the squash and cucumber beetles.

The birds will attempt to get the beetles off the trap but will get their feathers caught in the Tree Tanglefoot that I use to coat the traps.

While the yellow sticky traps are very effective at catching the beetles as they fly into the gardens, they are not compatible with the birds also wanting those beetles.