We use microbial inoculants because we generally need to increase the diversity and number of soil microbes in our soil food web.

(Update: 2 years after creating these lessons, I decided to start selling these inoculants, so you can now learn more about them here: mycorrhizal fungi and effective microorganisms.)

You can do this throughout the year, and one of the best times is while you’re planting.

Compost helps, but more concentrated microbial inoculants offer additional advantages – they’re easy, inexpensive, provide specific beneficial microorganisms, and some of them can be applied to plant leaves to inoculate the leaf surfaces.

In the Smiling Gardener Academy, there is a whole section on a few different microbial inoculants.

Today I just want to mention the main 2 you might want to use at planting.

Mycorrhizal fungi is the first. They are among the most important microbe partners of plants, and an inoculant should be applied during planting when it’s possible to get the spores on the roots. They bring all kinds of benefits to plants.

Effective microorganisms (aka em 1 microbial inoculant, or a good similar product is scd em) is a liquid mixture of very important microbes. It’s my favorite inoculant and I use it all the time with great results, which is why I spend so much time on how to make your own from a mother culture in the academy.

Update: 2 years after creating these lessons, I decided to start selling these inoculants, so you can now learn more about them here: mycorrhizal fungi and effective microorganisms.

Feel free to ask me any questions about mycorrhizal fungi or effective microorganisms down below. 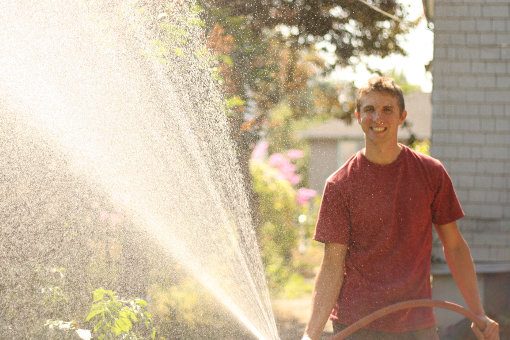 The next thing on my list is bringing in microorganisms, bringing them into the soil. And that can happen all throughout the year.

And, we do this with compost is one way and compost has advantages, but so do some of these technologies that are coming out in the last 20 years – and especially the last 5-10 years – are more concentrated products that are very inexpensive and easy to apply.

So I love microbial inoculants and I have a whole section on them in the Academy, but today I want to just show you two of my favorites.

And the first one comes in a bag like this and its called mycorrhizal fungi. You may have heard me talk about it before. It is an extremely fine powder, even finer than the rock dust I showed before.

And what it is, is a bunch of spores of this special kind of fungi, this mycorrhizal fungi that forms a relationship with the roots of most plants in nature and in our organic gardens.

The fungi go out into the soil and bring water and nutrients up to the plant and then the plant gives food to the fungi in return so it is this symbiotic relationship that happens.

In our vegetable gardens the reason that we’re bringing in things like compost and fungi and the next thing I’m going to show you is because they are often lacking just like the organic matter is often lacking.

Because of tilling, pollution, chlorine in our water, if we’ve been withholding organic matter from the landscape by raking out the leaves and taking away grass clippings. Certainly pesticides, chemical fertilizers, general pollution and toxicity, monocultures, all kind of reasons.

We don’t have the microbial diversity that we used to or that you would find in an untouched field or forest.

And all I need is that much, like less than a teaspoon. And I don’t really even have to worry about getting the whole plant, I just kind of rub and it gets on there and eventually the fungi will go all over the place and that will be great.

So that is a really amazing way to help this plant get the nutrients it needs. These fungi, they are going to form a relationship right there. And it’s a special kind of fungi that do that and you can by a pound of this stuff for, maybe around 25-30 dollars, depends on the brand. So, that’s mycorrhizal fungi.

The next one which you may have heard me talk about before because it’s my absolute favorite it’s called effective microorganisms (EM).

I get into this big time in the Academy and this is a liquid culture of very specific fermenting microorganisms like lactic acid, bacteria, and saccharomyces yeast and certain photosynthesizing bacteria in very specific proportions.

What I’m going to do is I’m going to water these plants in, with this mixed in quite a lot of water like a few hundred parts water.

So I get into this big time in the Academy and this is kind of a good example of the kind of people who would like to go into this Academy. As I’ve said before it’s not really for just kind of average gardeners who want to keep up with the Jones’ is something that I say sometimes.

It’s really going beyond the Jones’. It’s for people who are really passionate about it, like I am.

And who would be willing and totally interested in learning how to take a culture of microorganisms and mix it with molasses and water and some other stuff and ferment it for awhile to make your own incredible microbial inoculant for your organic garden.

So this stuff is just so exciting to me. It’s just for people who are willing to do some of the stuff I’ve been showing you in these videos but even in more detail. Willing to put in a little work up front to get the benefits of your goals.

My goals are this huge vegetable garden I have all around here that’s free of pests and that’s a really inspiring place to be, those are just my goals.

So effective microorganisms em is a big help in that and the other microbial inoculants are, too.

In the next video I’ll talk a little bit about how I’m going to maintain this organic garden I’ve just planted here and the effective microorganisms comes in there as well.