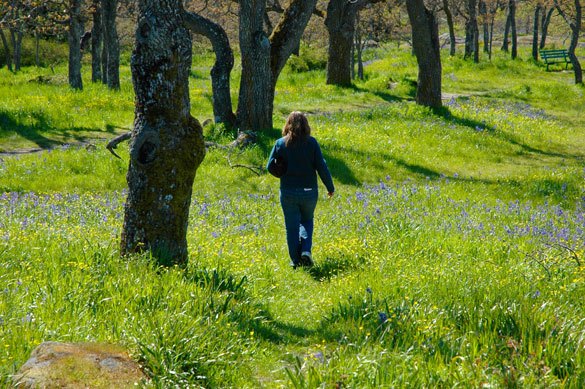 Organic Gardening Goal 10 : To encourage the creation and protection of native plant and wildlife habitats.

Native gardening is becoming increasingly popular in conventional and organic gardening. The two main reasons generally cited for planting native plants are because they are:

The truth is that the above points are sometimes false. That doesn’t mean we shouldn’t practice native gardening, but just for the record:

Why Do Non-Native Plants Do Better In Our Gardens?

The reason non-native plants often do better in our organic gardens is because native plants actually grew in very different conditions than are present in and around our cities and towns, and anywhere that humans have spent much time, which is pretty much everywhere we have gardens.

For example, in many parts of North America and many other places, native plants grew in an environment that was mostly covered by healthy forests. The soil, light and water conditions were very different there. Even the air conditions are hugely different underneath a forest canopy as there is way more CO2 there.

But chances are good that where you are looking to practice native gardening is in a relatively open space, with soil conditions that have been greatly disturbed, less organic matter, and so on.

This is where many non-native plants flourish.

Organic gardens with greater diversity that includes non-native plants will generally have more wildlife. Gardeners around the world have noticed that birds and butterflies and insects often spend more time on non-native plants than native plants. I’m not sure why, but it’s the way it is.

Over the last couple of centuries, we have turned our mostly-forested land masses around the world into fields and roads and cities. The point of this article is not to say if that was right or wrong, but just to point out that our environment has changed in a drastic way. The native plants aren’t going to stay around for this.

Most of the time, there is no point in trying to keep the non-native plants out of certain areas because they will just come right back in. If we decide we want to practice native gardening that includes native plants, we need to focus instead on the root of the problem.

What To Do About It

Native gardening does have a role to play, but there are some things we need to do first.

We need to first stop causing so much disturbance to the natural environment.

And then we need to work to restore it by bringing the soil conditions back to the way they were. It’s obviously a huge task in which everyone needs to be involved.

The other thing about most non-native plants is that they are mostly “pioneering” plants that come to repair the soil. They do things like fix nitrogen, balance soil conditions and clean up polluted water, all very helpful for organic gardening.

Once their work is done, which takes years, many of our native plants will come back and our native gardening will be more successful.

Should We Engage In Native Gardening?

So, should we avoid native plants? Of course not. We should plant lots of them, and when I’m designing an ornamental garden I use almost 100% natives.

But we should take just as much care to give them the best growing conditions that we can, because they need it, even more than many of the common non-native plants. They are not acclimated to our compacted soils that are low in organic matter, so we have to improve conditions.

And if we want lots of wildlife, we should plant a diversity of native plants that will feed them and house them. We may choose some non-natives, too. It doesn’t mean we try to grow things that aren’t right for our climate, but we may use plants from other climates similar to ours that are better adapted to our environmental conditions as they are now.

As for food, if we want a diversity of food, we grow lots of non-native plants. Almost all of our common food plants are not native. Yes, we should educate ourselves on the wild plants that have fallen out of favor and incorporate them, but if we want tomatoes and potatoes and all of the other non-native plants that are in your grocery store, we have to rethink the native-only mantra.

Of course we still want to preserve our native plants – even those that we’re not particularly fond of – because they have a role to play in the ecosystem.