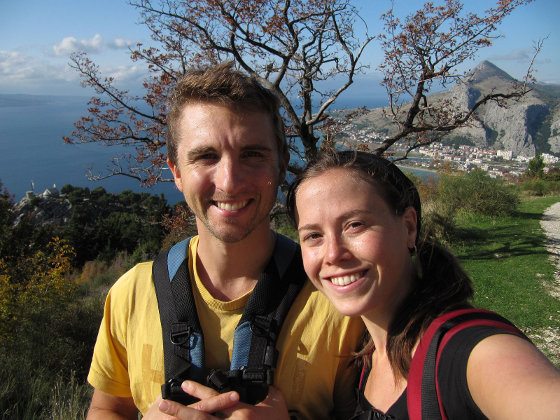 I mention my wife Heather here from time to time, so I think it’s fitting to let you guys know we’re splitting up after 10 years together, nearly 3 of those in marriage.

The good news is that so far, about 10 days since the decision was made, we’re still hoping to continue as distant friends and virtual business partners from our respective cities (wherever those may be).

We’re well aware that could change as our feelings and emotions change daily, but right now it feels like it might be possible.

We spent our last few days in Peru having a wonderful time just as old friends, and a couple of days back home dividing up our things.

We started working from home together about 3 1/2 years ago, and with spending so much time together working, our relationship has gradually been moving a little more towards a business relationship.

While we did do lots of fun things together, we also worked a lot, so it’s not been the most balanced lifestyle.

We’ve certainly loved each other very much and had great times, even throughout Peru, not to mention the fun we have running the websites together, but most of our conversations were about work.

I will say I’ve been thrilled with our relationship, and although it’s easy to take a person for granted after 10 years, I was still very proud to have her.

It was Heather who precipitated the split. It seems she hadn’t been quite as happy for a while but she didn’t know why. Then she just woke up one day and felt in her heart that the relationship was over.

It was a huge shock to me and I would have liked a chance to work through whatever issues there might have been, but Heather just wanted to move on.

It’s possible we’re in denial that a breakup could be this bearable, but so far it’s been okay. That being said, if you have any words of encouragement, I’d be thankful to have them posted below – it’s always nice to have support at a time like this.

I just thought I’d bring you into the loop because I feel a bond with many of you who leave great comments/questions and send such nice emails. I’m very grateful to have you.

Thanks so much to everyone who left comments and sent emails. I’ve read them all multiple times and your support makes all of this much easier!

Rather than respond to each one, I’d like to address some of the main thoughts you guys had:

You two are making a mistake.
Maybe, I guess only time will tell. I would have liked to have worked on the relationship, but since that’s not an option, I had to decide how to handle it. I could be sad or angry or I could try to maintain some form of friendship and focus on the positive side of this, the opportunity for a new beginning. I prefer the latter.

Maybe you just need some time apart to see that you are meant for each other.
Maybe that’s true, but I think we’re both moving in a more positive direction. But if that is the case, that’s cool. As long as we both end up happy, that’s what’s important. If one of us finds someone else and the other doesn’t, well, that wouldn’t be very nice would it? Let’s hope I’d get the right side of that deal (kidding!).

It’s normal for a marriage to become more like a friendship, but it’s still worthwhile keeping.
I could see that, too. That’s not really something I can speak to because to me, our relationship was still more than a friendship.

The grass isn’t as green on the other side as you think it is.
I believe you. But in my case, I’ve been let loose on that other side and I can either focus on the green grass or the weeds – I’m choosing the grass (okay, that’s a bad analogy on this website because I like weeds, too, but you get the point).

You should fight for her. She wants you to.
Several people said this. If I thought it was true I would have fought more than I did, but I just don’t see it. Heather knows I thought it was worth working on things, but it wasn’t an option for her, and I know her well enough to know she’s not hoping for a pursuit.

It will be difficult to keep the friendship going.
I can see that being the case, but I think it’s worthwhile to make an effort for now, right? If it fades out then so be it.

I hope that addresses the main things that came up, and thanks to everyone else for your encouraging words. It’s nice for me to be able to share this here.