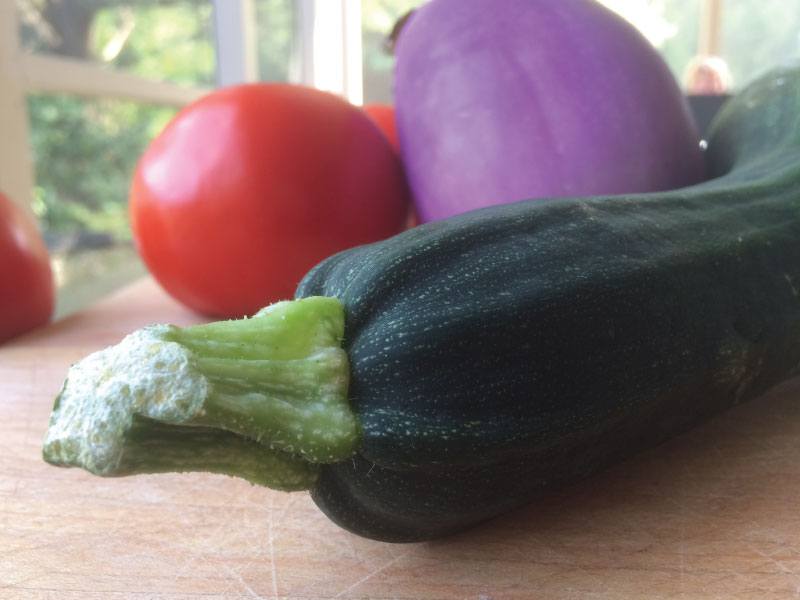 Zucchini belongs to the cucurbit family (don’t you love that name?!) along with melon, cucumber, and hard-skinned squash like pumpkins. It’s a summer squash, which means it’s harvested before autumn sets in and the rind becomes hard like those of butternut or acorn squash.

Orangey yellow zucchini blossoms are also edible and incredibly yummy. In my family, they get stuffed with cheese, dredged in egg, fried ‘til golden, and often sandwiched between two slices of bread. I get giddy every time I see them at the market or in my garden. If you’re harvesting them yourself, look for flowers attached to narrow stems (the non-fruiting males) versus flowers attached to stems that look like baby zucchini (the fruiting females).

According to the University of Arizona’s Master Gardener Journal, summer squash can be traced all the way back to 5,500 B.C. where they were a staple of Mexican and northern South American diets. After Europe colonized the Americas, summer squash was brought across the Atlantic, where it is believed that the Italians developed zucchini, giving it the name we now use. 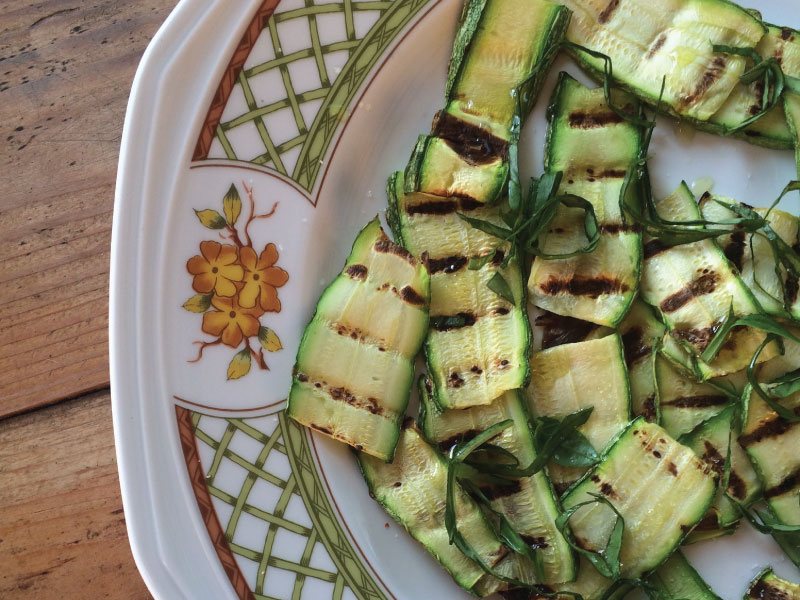 How ‘bout that name?

Interestingly, even the name implies that the plant is going to be a big producer. It comes from “zucchino,” the diminutive form of “zucca” which means “gourd” or “squash.” “Zucchini” is the plural form, because—obviously—there’s never just one “zucchino”!

Each sprawling plant can produce about 3-9 pounds of young fruit(!). Those numbers made Barbara Kingsolver wonder in Animal, Vegetable, Miracle: “Could they design an automobile engine that runs on zucchini?” Imagine the problems it would solve if they could. 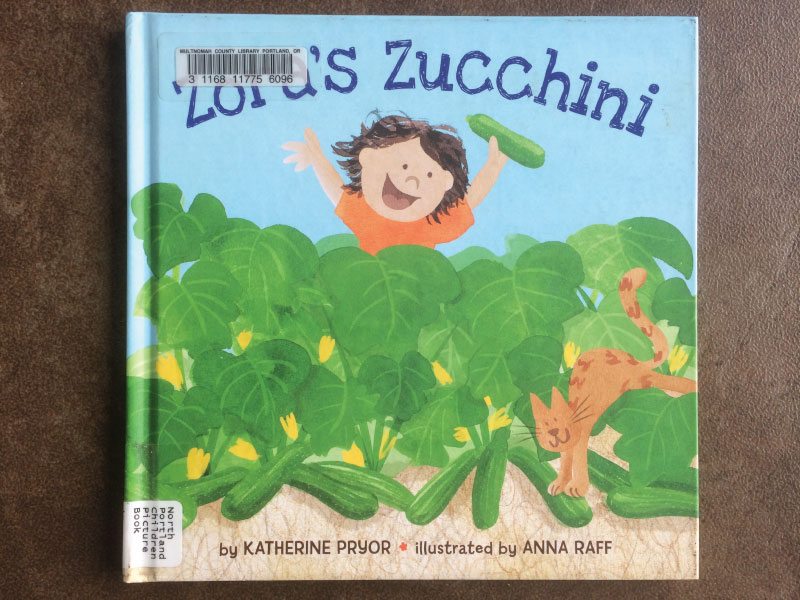 After my technical research, I put my nose in a different kind of book.

I pulled Zora’s Zucchini by Katherine Pryor and illustrated by Anna Raff off the children’s shelf at my local library. It’s about a girl named Zora who enthusiastically plants several zucchini starts in her garden and ends up with more than she can handle come late summer. I’d like to read a few pages to you:

“By the first day of August, Zora’s garden was a jungle of prickly, tickly, bushy, blossomy plants. Every single one of those plants was covered in zucchini. There was no way her family could eat it all.” 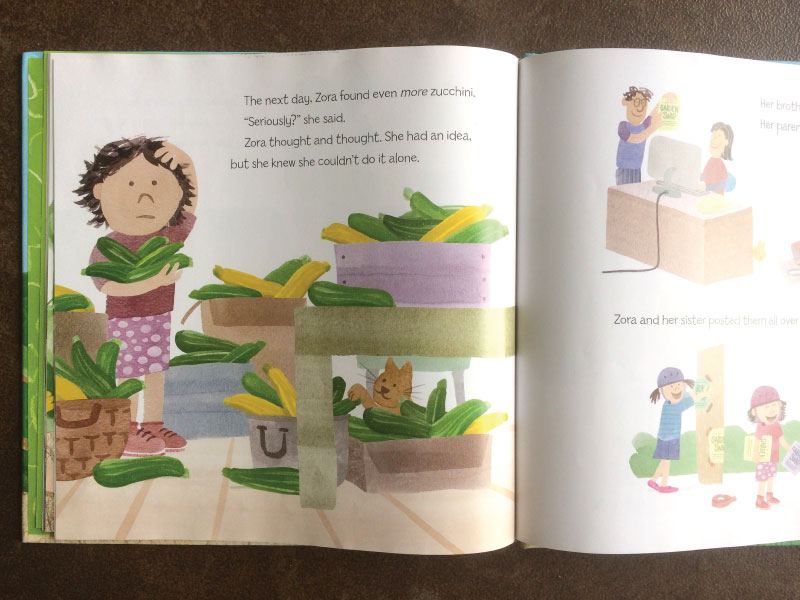 “The next day, Zora found even more zucchini. ‘Seriously?’ she said. Zora thought and thought. She had an idea, but she knew she couldn’t do it alone. Her brother painted the signs. Her parents printed the flyers. Zora and her sister posted them all over the neighborhood.” 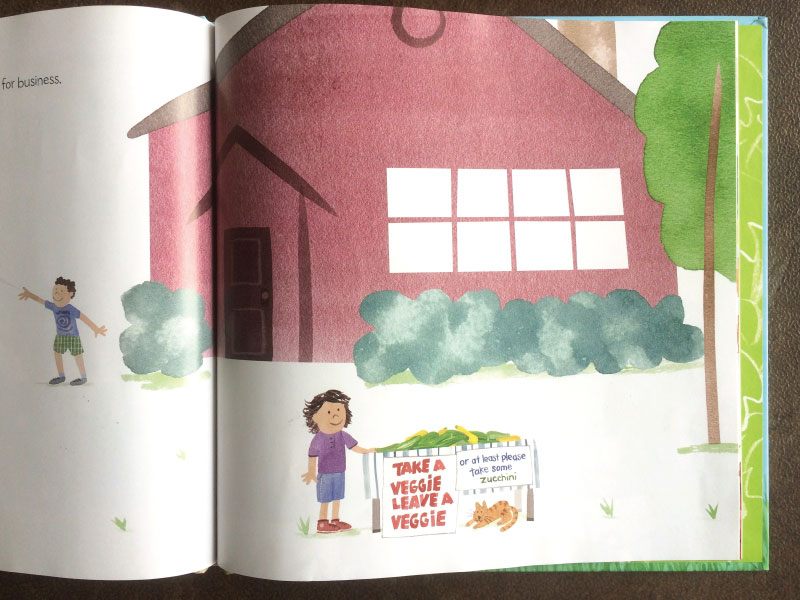 “On Saturday, Zora’s Garden Swap was open for business.”

“Then, Zora saw Mrs. Rivera carrying a big bowl of raspberries, and Mr. Peterson bringing potatoes. Neighbors stopped by with carrots, peppers, and green beans from their gardens. They shared plums, apricots, and cherries from their trees. People left whatever they had too much of, and took whatever they wanted. Zora traded and traded until all her zucchini was gone.” 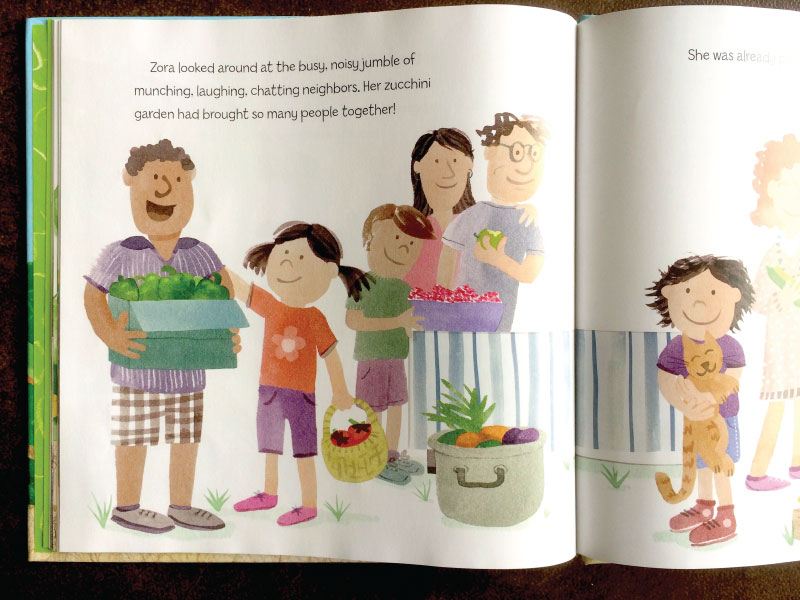 “Zora looked around at the busy, noisy jumble of munching, laughing, chatting neighbors. Her zucchini garden had brought so many people together!”

Who knew children’s books could be so packed with wisdom? I’ve been in Zora’s shoes many times before. In summers past, I simply couldn’t unload my excess veggies on friends and family fast enough.

How to grow zucchini

What to plant. There are both bush and vine varieties of zucchini. Bush plants are best for smaller spaces, while vining varieties need space to sprawl (and can ramble through your garden, making harvest a sort of hunt). You can sow seeds or plant starts. One plant per person in your family should keep you well fed. If you’re using seeds, you’ll likely have leftovers; save those for next year.

When to plant. Zucchini is frost-sensitive, so wait until one week after the last front to plant outside. Wait for warm soil (60F and above) and air (70F and above). Plant anytime up until midsummer if you want a later crop. They’ll be ready to harvest in about 50 days.

Where to plant. Choose a spot that gets full sun and keep in mind that plants may sprawl.

How to plant. Sow seeds at a depth of 1 inch in well-drained, compost-rich soil. Plant starts in a small hole, being careful not to damage roots. Space plants at 3 feet from center. To optimize space, add a trellis to encourage vertical growth of vining varieties.

How to maintain. Keep the soil deeply moist, watering before the soil dries out completely (perhaps 2-3 times per week in summer). Water directly at the base of the plant, under the leaves. Apply mulch if you’ve got it to regulate soil moisture and temperature once the seedlings are 2 inches tall. Leaves wilting under the hot summer sun is normal; they’ll spring back to life at night.

How to harvest. Gently twist squash or cut at stem when they’re young and tender (6-8 inches long and 1.5-3 inches in diameter). Harvest often to encourage more production (or if you can’t give it away fast enough, leave 1-2 on the plant to slow it down). As zucchini grows older, it can become tough-textured. If one gets too big before you notice, it’s probably a good candidate for zucchini bread. For zucchini flowers, harvest in the morning before they close. Look for male flowers—those without tiny zucchini attached—and cut with 1 inch of stem.

How to store. Refrigerate fresh zucchini for up to two weeks or shred, drain, and store in the freezer for up to 3 months. Place zucchini blossoms base-down in water and store in fridge. Use them within a few days.

With all this history of zucchini’s prolific success, when I sowed my plants this year, I was certain I’d be swimming in the stuff come August. But, for whatever reason, it did not show up to the party. Perhaps it has something to do with our 57-day rainless streak (and our related struggle to keep up with watering).

So now, instead of being the “sharer,” I find myself in the position of the “sharee”—dependent on the generosity of folks who’ve had a good harvest.

Lucky for me, I’ve spent the past two weeks with family in Ohio, and they’ve shared their garden goodies with me so freely. My dad planted a garden at my grandma’s that grew so rampantly that the rows are no longer distinguishable. I spent a lot of time in there harvesting beans, tomatoes, eggplant, and broccoli. Navigating the stalks and leaves felt like a jungle adventure. Their proverbial cup was overflowing, and they shared it. I know I would do the same for them. 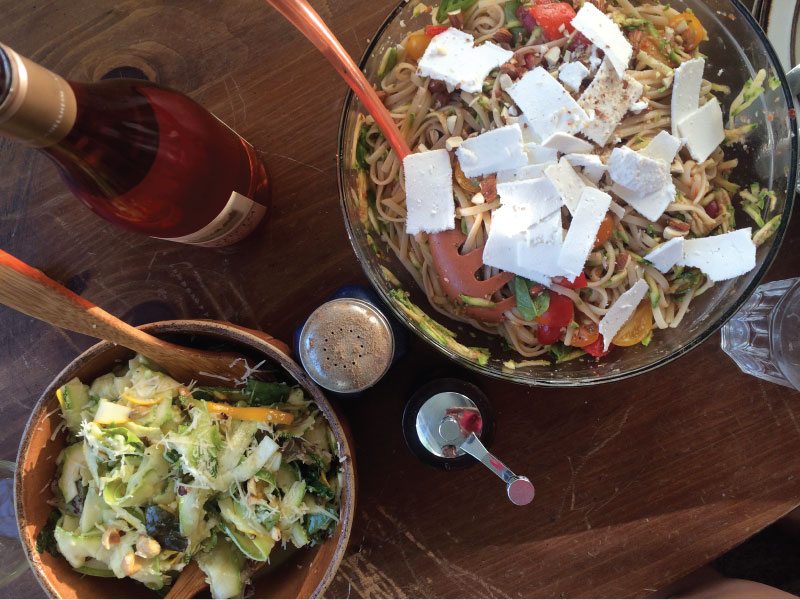 This garden karma extends beyond the fence

These acts knit together a resilient communal safety net, one that becomes stronger every time we reach across to give or receive. Our success as a culture of people from all kinds of backgrounds and ever-changing circumstances lies in this exchange. 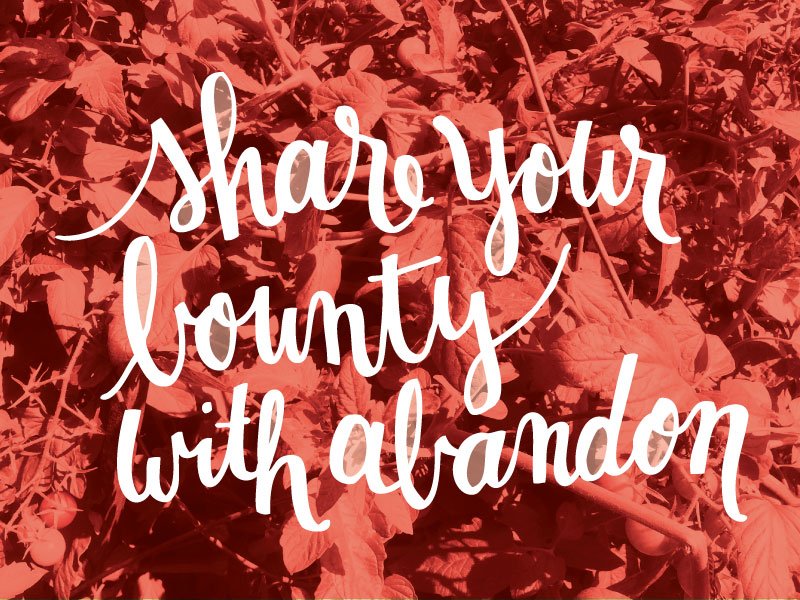 Practice this in your own kitchen: share your bounty with abandon

Next time you have more than enough, channel your inner Zora and spread that good around. The world needs what you can offer. 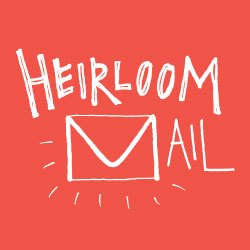 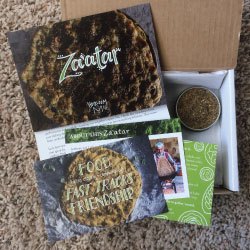 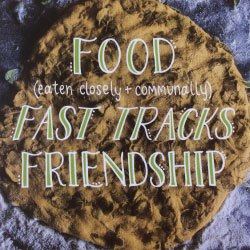