It’s Sunday morning, June 21st, the longest day of the year in the northern hemisphere.

I’m doing my once a month garden maintenance, pulling the small number of weeds that made it through my leaf mulch, spraying some organic fertilizers and microbial inoculants and sowing some seeds.

Last month, I introduced biointensive gardening when I was talking about a charity I support called Organics 4 Orphans [Update: now called Thrive For Good].

Biointensive gardening is a combination of methods that have been used in various parts of the world for thousands of years, brought together by Alan Chadwick, refined by John Jeavons and Ecology Action since the early 70s, and now used all over the world.

Some people say the claims that are made about the increase in yield and decrease in inputs under biointensive gardening are exaggerated (I agree), and that the amount of physical work that’s required can be immense (I agree), but if you have a small space, little access to inputs, and time to do that physical work, this method has its merits.

In some ways, the opposite of biointensive gardening would be permaculture. On many levels, the two philosophies are in agreement, but permaculture aims to get nature doing more of the work for us, while biointensive has us doing a lot of the work in order to maximize yield.

Over the next couple of months, I’m going to share with you the 8 principles of biointensive gardening, along with a few things I do a little differently.

One Of My Favorite Organizations 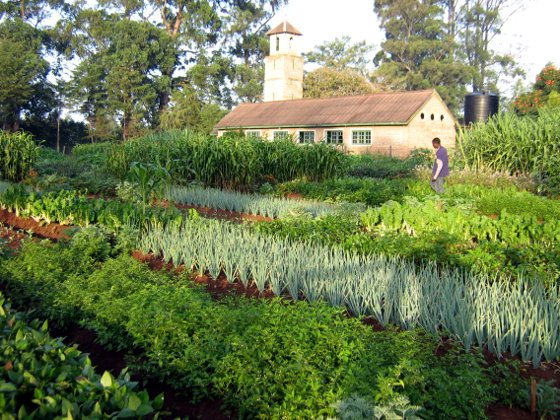 Nutrient-dense food is medicine, especially certain foods, many of which we can easily grow ourselves, such as garlic and mint.

(The latter is best grown in a pot because it spreads like wildfire.)

Today I’d like to talk about an organization that’s taking this to another level, and how this applies to you.

In 2012 I started giving a percentage of my income to various charities.

One of my favorite such charities is called Thrive For Good, run by Dale and Linda Bolton.

What I love about their approach is that they’re working with the world’s poor in a wonderfully holistic, sustainable, focusing-on-the-root-cause sort of way.

When I started giving to charities, I learned that despite our good intentions, a lot of aid is actually damaging to the recipients for various reasons, so I spent a lot of time educating myself on how to do it right in order to have the most positive impact.

One thing I learned is that we often impose our ideals on the recipients of our aid, which causes all sorts of problems.

Thrive For Good seems to understand that when you’re trying to help communities and cultures that are very different from your own, you need to work with the communities and the existing organizations within these communities to serve their needs, not your own needs.

This is crucial because so often we send gifts and other aid to the developing world that people not only don’t need, but that actually undermine their economies (e.g. TOMs shoes is often ridiculed for sending free shoes to communities where they already have plenty of shoes and where there are people who are trying to earn a living from making and selling shoes).

Since starting in 2008, their base of operations has been in Western Kenya where they’ve partnered with a local agricultural school called Manor House, which runs the courses in biointensive organic gardening.

This integrated approach of teaching people the skills to grow and prepare nutritious, medicinal food and then earn an income from it is, in my opinion, the way aid should be provided.

It’s the old adage of teaching a man to fish instead of just giving him a fish – but updated for the 21st century because it’s not just men, but women and children who are taking part in this process of growing organic food and medicine as well.

What this means for you is that from now on, every time a transaction occurs through my site, whether you’re buying some organic fertilizers or enrolling in my Academy (my online gardening course), I’ll set aside $1 to send to Thrive For Good and other similar organizations.

By the way, for Academy members, that means $1 for each month you’re in the course – not just when you sign up.

I’m also applying this $1 retroactively to the beginning of the year. From January through April I had 581 transactions, so this morning I sent a payment for $581US ($714CAD). Cool!

December Update: From September through December I had 514 transactions, so I’ve just sent a payment for $514US ($737CAD). Cool yet again!

I’m also hoping to go to Kenya with them someday, to see if there might be a way for me to help out with my gardening experience, and to see what I can learn from them.

In the Academy, I already teach many of the biointensive gardening techniques that are being promoted by Thrive.

But as I’ve been exploring the work they’re doing, I’ve been learning a few interesting things, especially with regards to medicinal plants (they’ve partnered with a German organization called Anamed International that’s promoting native medicinal plants in the tropics, such as the neem tree I mentioned earlier).